When you’re in the position of planning or attending a funeral for a loved one it’s important to know the difference between a eulogy and obituary. Whether you’re writing or delivering one yourself or are organizing either of them it’s vital to know what each is and what they’re for.

Very simply a eulogy is a speech that is delivered during a funeral or memorial that pays tribute to the life of the deceased and contains anecdotes, stories and characteristics of them. An obituary is a short deceleration that lets people know of a death as well as any funeral details. It is published in a newspaper or online and will include some details of the deceased but is less personal than a eulogy.

If you’d like to know more about the differences between eulogies and obituaries, what they both include and when and where they are appropriate then keep reading.

A eulogy is speech or reading that is delivered during a memorial or funeral. It honors the life of the deceased by touching on their achievements and the sort of person they were while also remembering funny anecdotes and stories. Those delivering a eulogy use it as an opportunity to pay a fitting tribute to a friend or family member who has passed away and as a way to say goodbye.

Eulogy comes from the Greek “eulogia”. Translated it means “fair speech” or “praise”. This reflects how we use eulogies today as they are speeches given in praise of someone.

An obituary is a short notification of a death that is traditionally published in a newspaper but also can be put online. It features the details of the death, a brief look at the deceaseds life and the funeral arrangements for the funeral or memorial.

Local newspapers are the most common place for obituaries to be placed but there has been a big growth in online obituary websites which are much more affordable and easier for the family.

The word obituary comes from the Latin words “obitarius” which means a record of the death of a person. It can be traced back to the early 1700’s where it was found to be used in newspapers as a register or announcement of deaths.

Eulogy Vs Obituary: The Differences

The difference between a eulogy and obituary is what they are intended for. A eulogy is a reading given to honor the life of the deceased, usually at the funeral. An obituary is more of an announcement or notice of death to inform people and a look back at the details of the deceaseds life.

Let’s break that down into more detail:

Eulogies are written by anyone close to the deceased. You will often find eulogies delivered by friends, family and coworkers. This is because anyone who has close ties with the deceased will be able to speak of them, the memories they have and the impact they had on their life.

Obituaries however are usually written by a very close family member like a child or spouse/partner. In some cases there are services that write obituaries for the family with details they provide. But this is not the most common way and for the most part the family will handle the obituary themselves.

Where Are They Delivered

Eulogies are delivered in the form of a speech or reading at a funeral or memorial. There can be multiple eulogies at one service.

Obituaries are mostly found published in newspapers or online. They act as a way of notifying people of the death but can be used to invite guests to or provide details of the funeral.

How Long Are They

Eulogies don’t have word limits. Time is a factor though as they are delivered at a funeral or memorial.

A eulogy that lasts too long is going to become awkward and upsetting for the family of the deceased. Instead eulogies lasts from a couple of minutes to 15 minutes on average.

Obituaries however are published in newspapers or online so the number of words becomes much more important. In newspapers there is likely to be a charge per word, line or even character.

Online is often much less strict with the pricing and word count. This has led to a growing in their popularity as there is the chance to say more in the obituary. But a traditional newspaper obituary tends to be no more than 500 words.

What Do They Include

Eulogies don’t really have a proper structure. There should be a beginning and ending but the main bulk of a eulogy is made up of stories, anecdotes and personal feelings of whoever is delivering it. They can choose how and in what order they want to express those.

Eulogies tend to be about remembering the legacy of the deceased and celebrating their life. Although they are delivered at a time of sadness most try to focus on the positives.

An obituary is a lot more formal and structured. The deceaseds name, date of birth and death are all listed to begin with. After comes a list of those who are survived by the deceased.

Following this is major details from their life including their education, family, children, career and more. The obituary ends with details of when and where the funeral or memorial will be held as well as any additional details like a request for donations or no flowers.

What Sort of Tone Do You Use

Eulogies are, for the most part, positive. They are used to remember the deceased in the best light and look back on the good times and what they meant to whoever is delivering it. The eulogy will focus on what the achieved and how they touched others lives.

An obituary though is more formal and solemn. It is about getting the information across in a frank way without bringing any emotion into it. Details of the deceaseds life are listed passively and are to inform rather than make a comment or judgement.

Who Writes a Eulogy?

Eulogies are almost always written by someone who knew the deceased well. This is usually a friend, family member, colleague etc.

If you’re struggling with composing a eulogy then try our guide to writing a eulogy or eulogy examples to give you some inspiration.

Who Writes an Obituary?

An obituary is written by those closest to the deceased. So direct relatives like a child or partner. 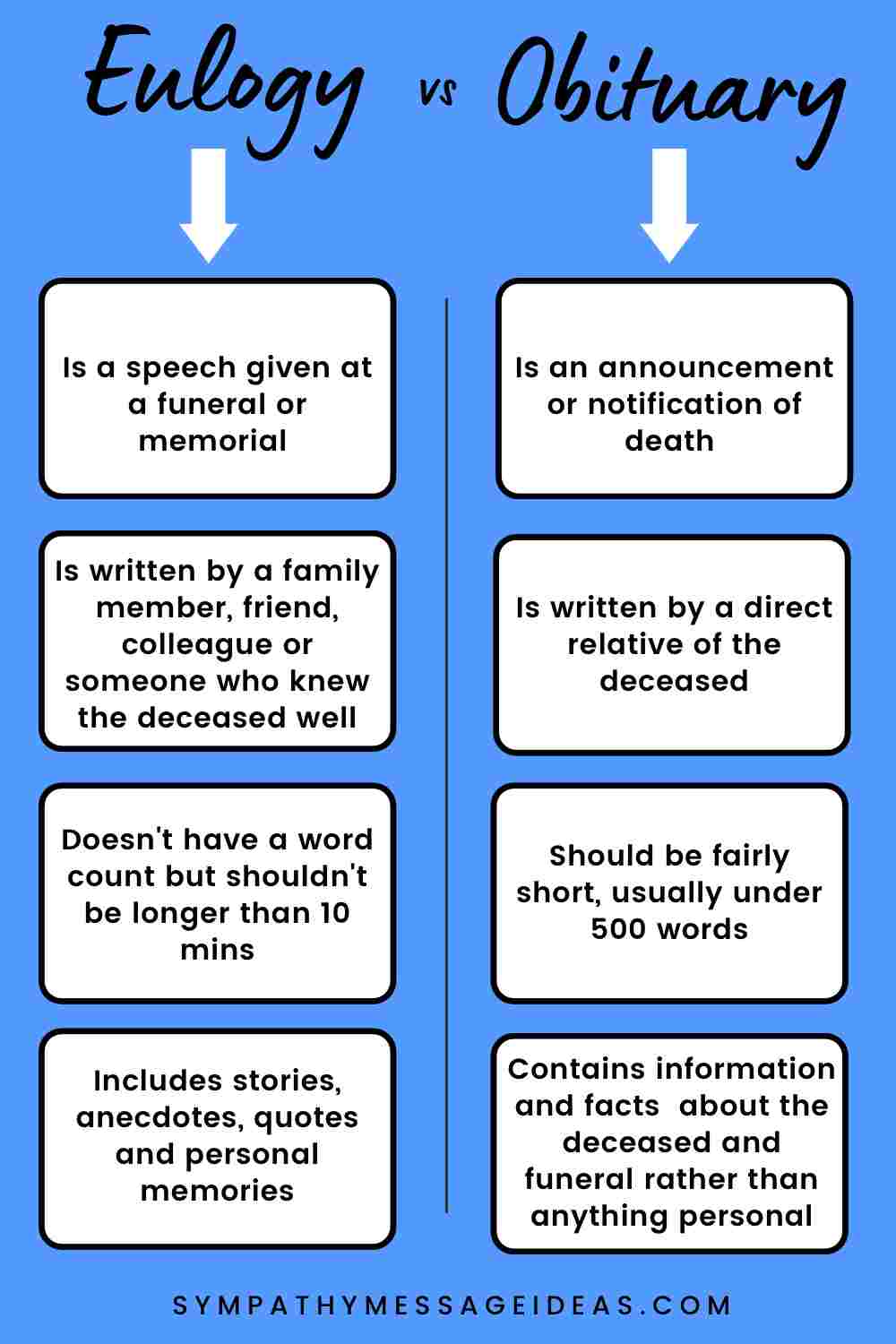 Do you Need Both a Eulogy and Obituary?

Neither a eulogy or obituary is a necessity. You can have a funeral without notifying people through an obituary. In fact you can skip an obituary altogether and notify those you wish to yourself.

And there is no need for anyone to give eulogies at a funeral or memorial. This is entirely down to the family and how they decide they want funeral to be.

However most funerals have some form of reading or eulogy. But it is up to those arranging the funeral to choose who and how many.

So you should now understand the differences between a eulogy and an obituary including when and where they are delivered and what is appropriate to include in them.

Hopefully this will have helped you with planning a funeral or writing a eulogy or obituary for a loved one. 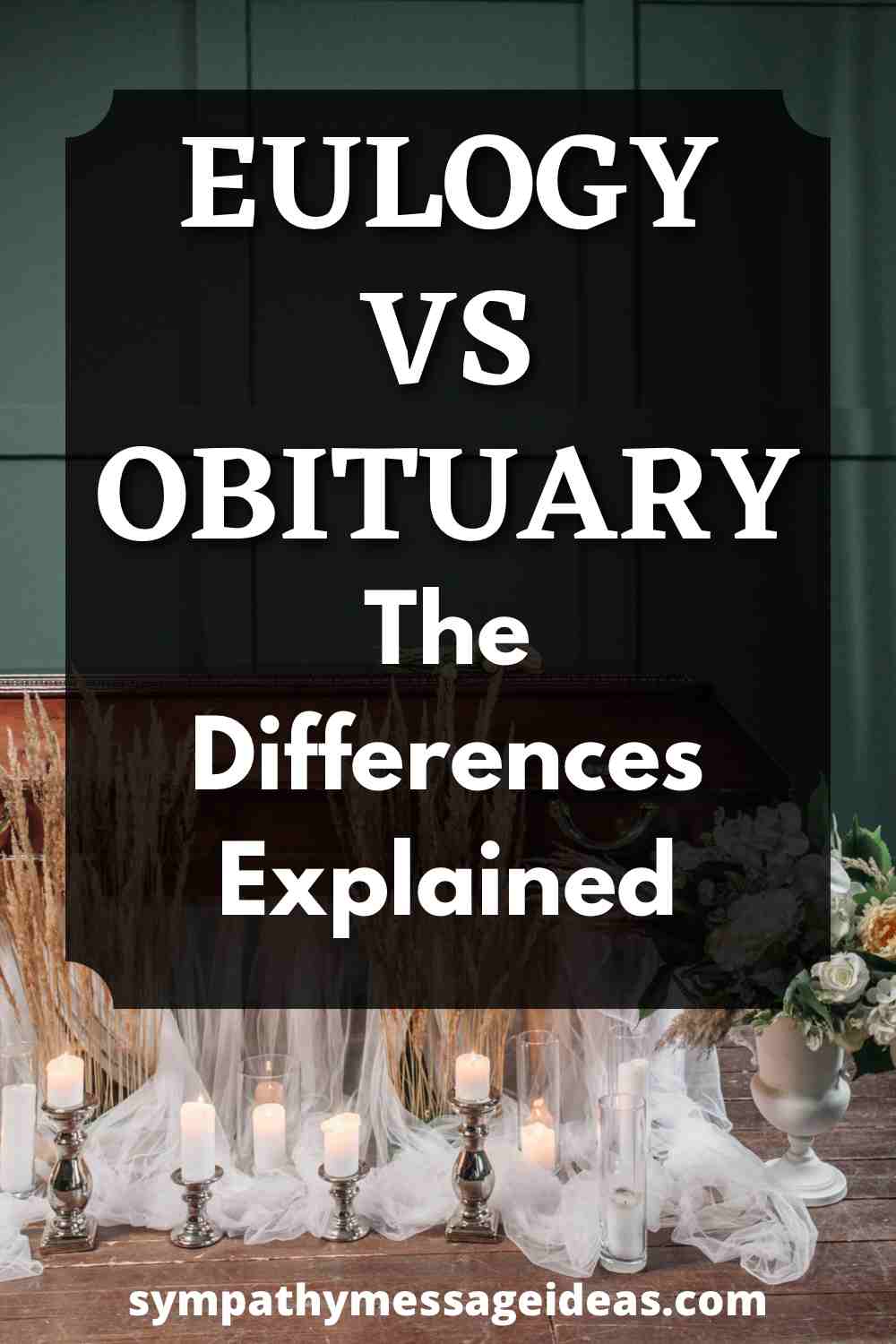 What to Say When Scattering Ashes: Touching Words and Quotes

What to Say to Someone Who Lost a Parent