Funeral Guides Death Announcements: How to Write One (with Example Templates)

When someone passes away it’s easy to forget that you need to inform others of their death. A death announcement is necessary to let family, friends and casual acquaintances know that a loved one has sadly passed away so they can attend the funeral, send condolences, make a donation or just offer their support.

But most people won’t know the correct etiquette for announcing a death, how to go about writing one, when the right time is and where is appropriate for it to be displayed.

You may be struggling with deciding what to include and how to word your announcement. Maybe you’re unsure of whether it’s right to put it on Facebook or a newspaper.

This guide will be perfect for you then.

We will look at all the necessary information that is required as well as how to write a death announcement, example templates for every scenario and more.

What is a Death Announcement

A death announcement is a statement that lets people know of the death of someone. It outlines the main details of the deceased and how they died, including their name, date of birth, the date they passed away, the location and any funeral arrangements or memorial service.

The point of a death announcement is to formally confirm someone’s death and let people know about it. They are sometimes called ‘Death Notices’ as well.

Death announcements have traditionally been placed in Newspapers so that they reached the largest number of people. That would also mean that they cost, usually being charged per word.

As times have changed it’s now common to see a version of a death announcement on the likes of Facebook, Instagram and other social media. This lets the family of the deceased reach all their friends and family much more quickly than through the more conventional method of the newspaper. It’s also more likely to get shared and be seen by a larger number of people as most of us have social media accounts.

What is the Difference Between a Death Announcement and an Obituary?

The difference between an obituary and a death announcement is that the obituary is written by a staff member or writer from the newspaper itself and goes over the details of their live like a biography. A death announcement is usually paid for by the deceaseds family and briefly outlines the details of their passing – name, date of birth, funeral or memorial service etc.

You can pay to have an obituary featured in a newspaper that was written by yourself. But again, the emphasis is on the life of the deceased and goes into much greater detail than a death announcement.

How to Write a Death Announcement

The good thing about death announcements is that they are usually very short. If you’re struggling after losing someone so dear to you then having to write paragraphs about them is going to be excrement hard.

So thankfully most death announcements are brief. You only need to mention the most important details and it should only come to a few sentences in total. Keeping it simple and to the point is the aim.

You may also find that if you’re death notice is for a newspaper then there is a maximum word count or limit. So again, shorter will be better.

You may want to talk or collaborate with others when writing your announcement. Not only can it be hard to write about a lost loved one but other family members and friends may have insights you might not or miss.

So work together and reach out to family members about what they think should be included.

How to Announce a Death on Social Media

You may be a bit hesitant about sharing a death announcement on social media but you shouldn’t. Many people now choose to use places like Facebook to share major news and because virtually everyone has an account it means you can reach more people than ever before.

You should probably talk to the other family or friends of the deceased before doing so though. They may feel uncomfortable about it or would like to have some input into what is said.

What do you Say on Social Media When Someone Dies?

If you decide to go ahead and share someone’s death on social media then there are a few things to consider when choosing what to say:

A standard or traditional death announcement contains the following information:

The Smith family announce the passing of their mother, Sarah, who died peacefully on April 14th, 2021 at home. She was born on October 6th 1948 in her home town of Camden, Maine. There will be a funeral held on May 3rd, 2021 a 2:30pm at St. Barnards Church. It will be followed by a reception. Please send donations to the American Heart Association in Sarah’s honor.

If you aren’t sure how or where to put the necessary details then this basic outline should help:

The [surname] family announce the passing of [full name] who died peacefully on [date] [year] at [location]. [He/She] was born on [date] in [city/state]. There will be a [funeral/memorial] held on [date] [time] at [location]. It will be followed by a [reception/burial]. Please send donations to the [charity] in [names] honor.

These are some different variations of example death announcements that you can use as ideas or inspiration when writing your own.

We are sad to announce the death of Ian Gibson who passed away on Thursday, 12th February 2021. He was born on November 22nd, 1952 in New York. A memorial will be held on Wednesday 26th February, 11am at Hope Hill Church.

The Baker family announced with great sorrow the passing of their beloved aunt Cynthia Smith. She was born June 29th, 1948. Her funeral will be held at Trinity Church on July 13th at 3:00pm, followed by a reception. In lieu of flowers please make donations to Doctors Without Borders in Cynthia’s name.

Anthony Jones sadly passed away on Friday 6th August, 2022. He was born on 17th January 1959. There will be a private memorial followed by a private funeral.

Jane Reeves passed away on September 10, 2022, surrounded by her family after a courageous battle against cancer. A public memorial service will be held at 4:00pm on Tuesday, September 22nd, at the First Baptist Church, followed by a reception.

We must sadly announce the death of Gareth Johnson. He passed away peacefully on 26th March, 2021. There will be a viewing on Wednesday, April 2nd at the Liberty Church at 11:00am – 12:00pm. The funeral service will follow immediately afterwards.

Sending an email is also an acceptable way to announce a death. It lets you reach family and friends quickly, much like social media, but is far less public.

If you aren’t sure how to write or what to say in a death announcement email these examples should help.

Message: On [date], we are sad to announce that [name] passed away, [age]. We are holding the funeral service at [location] on [date] [time]. It will be followed by a [reception/burial]. In lieu of flowers please send any donations to [charity] in [names] honor.

Subject: The Smith’s announce the passing of Mary Smith

Message: It is with sadness we announce that Mary passed away peacefully on April 17th surrounded by loved ones. We plan to honor her incredible life by inviting friends and family to our home for a celebration of life. The date is still to be confirmed but please keep an eye out for another email from us.

Subject: Our Beloved Daniel has Passed Away

Message: It is with sorrow we must let everyone know that Daniel has passed, on 12th May, 2022. He will be forever missed. He had requested that his ashes be scattered over his favorite spot, by the harbor, and so we will be holding an ash scattering ceremony on May 29th. You’re all invited and we look forward to seeing you there as we say goodbye one last time.

Subject: We regret to inform you that Wendy Dale has passed away

Message: To everyone who knew Wendy we must regretfully announce her passing. We would be honored if you would join us at the funeral on Saturday, 14th November at 2pm at St Andrews Church.

In the past a death announcement or notice has been handled by the funeral director. They will discuss with you what you want it to say and where it will be placed.

It is the funeral director who will actually have the death notice placed in the newspaper you choose. But if you’re not working with a funeral home then you may have to submit the death announcement yourself.

You can place a death notice in national and local newspapers as well as other specific organizations that cater to the announcement of deaths (religious publications, for example)

You can also use online obituary websites and create your own memorial site for your deceased loved one where the death announcement could be published.

Most newspapers will be happy to include a photo of the deceased along with the announcement. This usually costs extra though.

You will probably need a digital photo of the deceased, rather than a traditional/analogue photo from a film. Technology dictates that these things are done solely through computers these days so the photo needs to be digital too.

There is almost always a fee for publishing a death announcement. How much will depend on the newspaper or papers you want to use.

If you’re going through a funeral home then they will give you the final price. You can of course go direct to the newspapers and arrange it yourself.

There will be a pricing structure – some may charge per word, others per line or even the number of inches it takes up. Also the number of days you want the announcement to appear for will increase the cost. Some days are more expensive than others too.

All of this can add up quickly and become much more expensive than you may first have thought. It’s best to ask the newspaper their pricing structure or policy first. That way you can adjust or rewrite your announcement so that it doesn’t become very costly.

If you make a mistake and submit your death notice with the mistake included then the newspaper will charge a fee to have it altered or rerun. So proof reading it thoroughly is essential.

Go over it multiple times. Ask a family member to do the same. You can’t expect the funeral director or writer as the newspaper to do the job for you. If there’s an error, especially if it pertains to the deceased, they won’t know and so couldn’t correct it even if they wanted to.

For some more help and ideas try these resources:

The main thing to remember is that a death announcement needn’t be anything major or detailed. It isn’t an obituary, just a notification of a death.

So keep it simple and short. Don’t feel the need to include any additional details and don’t overpay. 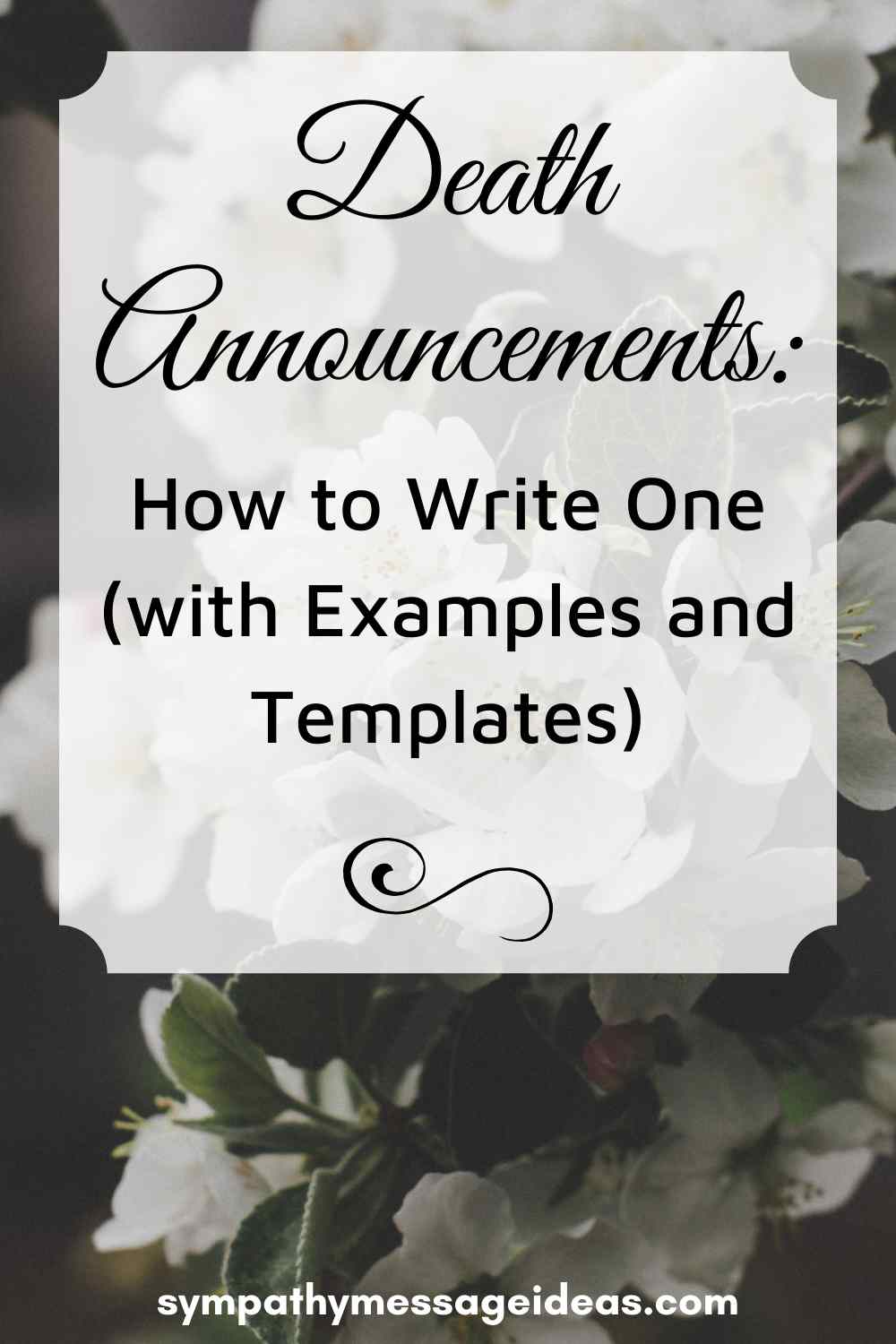 What to Say at a Funeral: The Ultimate Guide