Blog ‘In Lieu of Flowers’ Alternatives and Etiquette

If when an obituary is written the family would prefer an alternative to flowers – a gift, donation to charity etc.- then the phrase “in lieu of flowers” is used. But as it’s not a phrase that is very well known it is often misinterpreted to mean don’t send flowers, rather than what the family may have intended.

That’s why knowing the etiquette of using “in lieu of flowers” is important. For both the family of the deceased who are making the request and also those attending the funeral/wanting to send their condolences it makes sense to be familiar with what it genuinely means.

That way you can be sure you do the right thing: be that making the request you want for your deceased loved one or sending the correct memorial that the family has asked for.

So we’ll take a look at the etiquette surrounding “in lieu of flowers” and then some alternatives wordings you can use instead to ensure everything is as clear as possible.

What Does In Lieu of Flowers Mean?

‘In lieu of flowers’ is another way to say “instead of flowers”. It is used by families after a loss to request alternatives to flowers that are sent to the funeral.

It is often used in obituaries or funeral invitations. It lets those planning to attend a memorial or funeral to do something other than send flowers.

One common request is for a charitable donation rather than flowers. But families may also prefer a different sort of gift or expression of sympathy – something like financial help towards the funeral service.

Flowers hold different meaning to different people. Some may not be able to imagine a funeral without lovely arrangements and bouquets, others may prefer that money to go to something they see as more worthy. Some would like a mixture of both.

There is no wrong or right in this situation. As a funeral is a deeply personal event and it comes down to the families preference.

If you are planning a funeral then and would prefer something ‘in lieu of flowers’ then it’s perfectly acceptable to ask.

If you aren’t sure of the etiquette surrounding the asking for alternatives to flowers and how to go about it then keep reading as we will discuss it further.

In Lieu of Flowers Etiquette

There is some etiquette around the use of ‘in lieu of flowers’. If you aren’t exactly sure how to use it or the correct way then follow the rules below to ensure you get things right.

The most common request in lieu of flowers is for charitable donations. Follow these etiquette tips to make sure you get everything right:

Etiquette for Both Flowers and a Donation

You may decide to do as the family request and make a charitable donation but also send flowers to the funeral. If so then follow these tips:

In Lieu of Flowers Wording Examples

If you aren’t sure what words to use when writing in lie of flowers and how to make your requests then these examples should help.

What to Say Instead of ‘In Lieu of Flowers’

If you prefer to use something other than in lieu of flowers as part of your obituary or funeral invitation then these alternative wording examples should help:

Requesting donations to a charity in lieu of sending flowers is one of the more popular alternatives. These phrases and examples can be used in an obituary.

For Help with Funeral Expenses 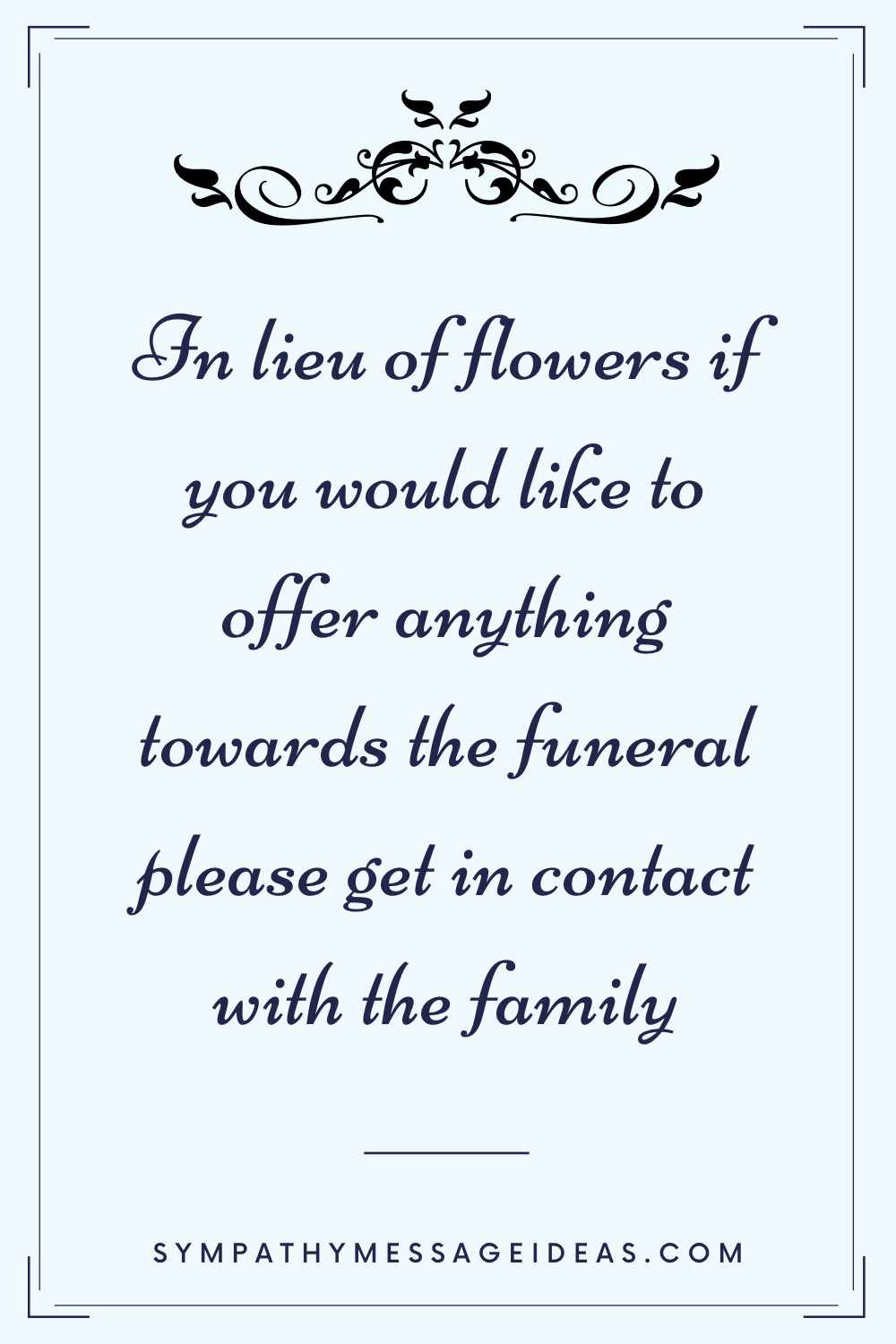 You can also leave it open to those attending the funeral or sending their sympathy to decide whether they want to send flowers or do something else.

‘In lieu of flowers’ etiquette snd wording can cause problems for both the deceased’s family and those attending the funeral.

As the family it’s important you decide how you want people to memorialize your passed loved one. So choose your words carefully and be sure that is how the deceased would have wanted to be remembered.

As a guest or mourner it’s safest to follow the wishes of the family and whatever they have asked for. However, sending flowers alongside their requests is usually acceptable too. 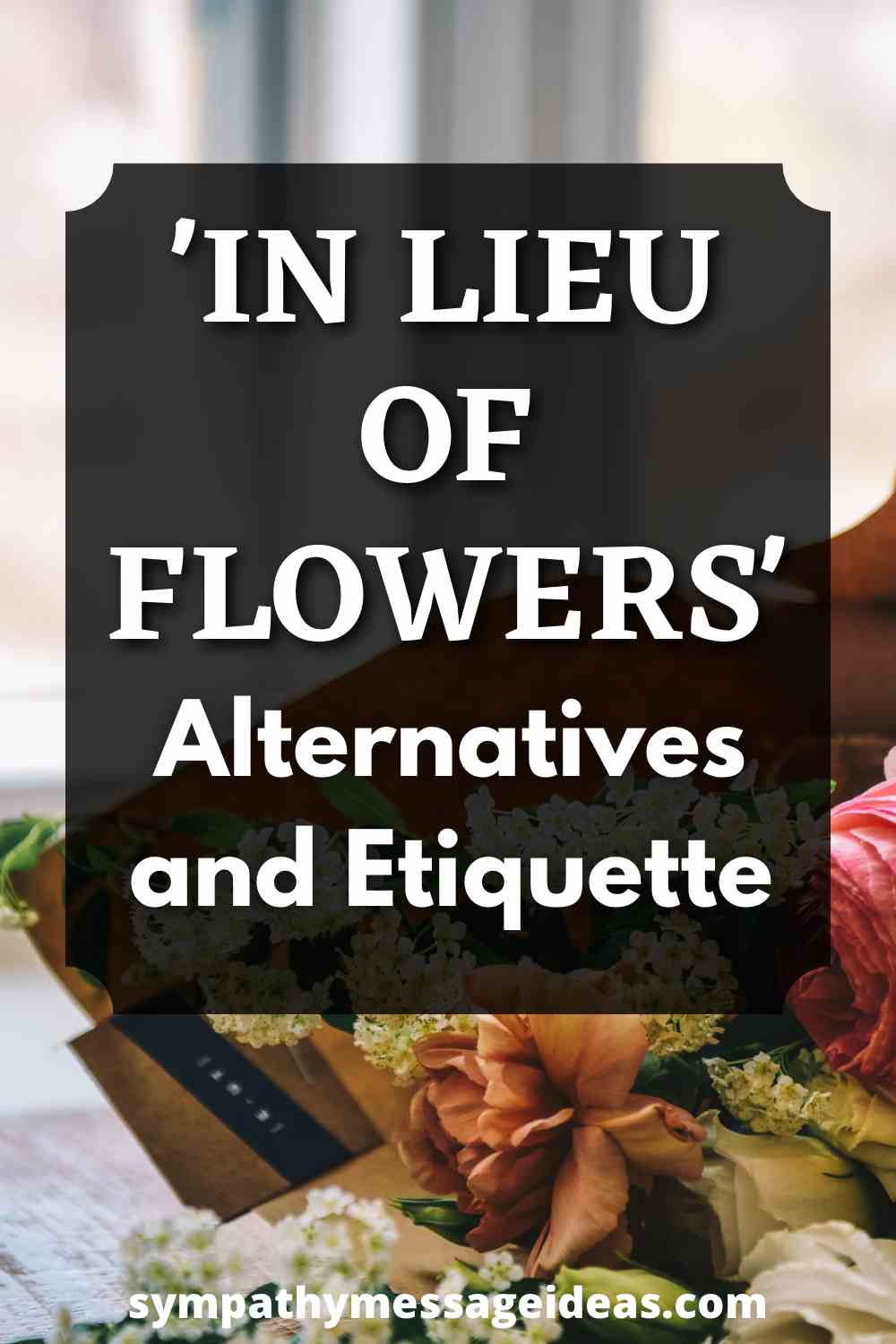 What to Say When Scattering Ashes: Touching Words and Quotes