Tragically over 700,000 people die due to suicide every year. It’s common amongst the young, but affects all different age groups and the number of deaths doesn’t even take into account the failed suicide attempts.

So with it being so prevalent it’s important for us to acknowledge and discuss it. Trying to understand why so many people feel the need to take their own lives is vital, and the only way to begin helping those who need it most.

This is even more pertinent if you have lost someone – a friend, loved one or family member – to suicide.

That’s why we’ve compiled this list of suicide quotes. We don’t think that a simple quote or saying is somehow going to solve all the issues surrounding suicide.

But they can help to promote understanding, to remove the stigma from talking about it, or just offer some comfort to those who have been affected directly by it.

So take a look at the quotes about suicide below and use them to become more aware of the issue and perhaps be inspired to help others overcome their problems.

One of the most important things we can do regarding suicide is to increase awareness of it. These quotes from some famous names look at the impact of suicide and can help to recognise the terrible effect it has on so many people.

“Suicide is a serious thing. And if you know anyone who is suicidal, you need to get them help. No one should be in pain. Everyone should love themselves” – Gerard Way


“Suicide doesn’t end the chances of life getting worse, it eliminates the possibility of it ever getting any better” – Unknown


“To anyone out there who’s hurting – it’s not a sign of weakness to ask for help. It’s a sign of strength” – Barack Obama


“The person who completes suicide, dies once. Those left behind die a thousand deaths, trying to relive those terrible moments and understand… why?” – Clark 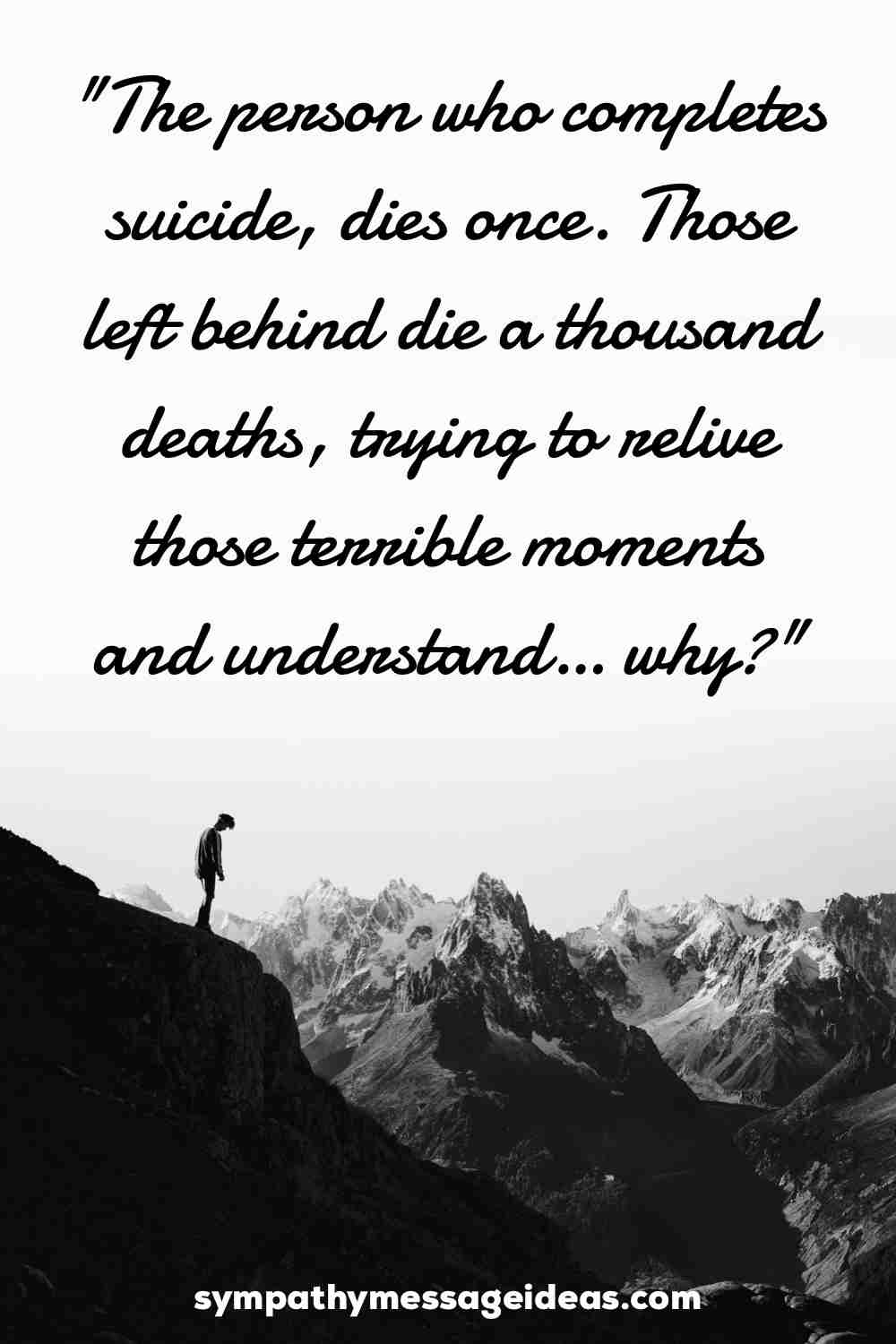 “Suicide is a permanent solution to a temporary problem” – Phil Donahue


“If you want to show me that you really love me, don’t say that you would die for me, instead stay alive for me” – Unknown


“Place your hand over your heart, can you feel it? That is called purpose. You’re alive for a reason so don’t ever give up” – Unknown


“When you feel like giving up, just remember the reason why you held on for so long” – Unknown


“Hope is a necessity for a normal life and the major weapon against the suicide impulse” – Karl A. Menninger 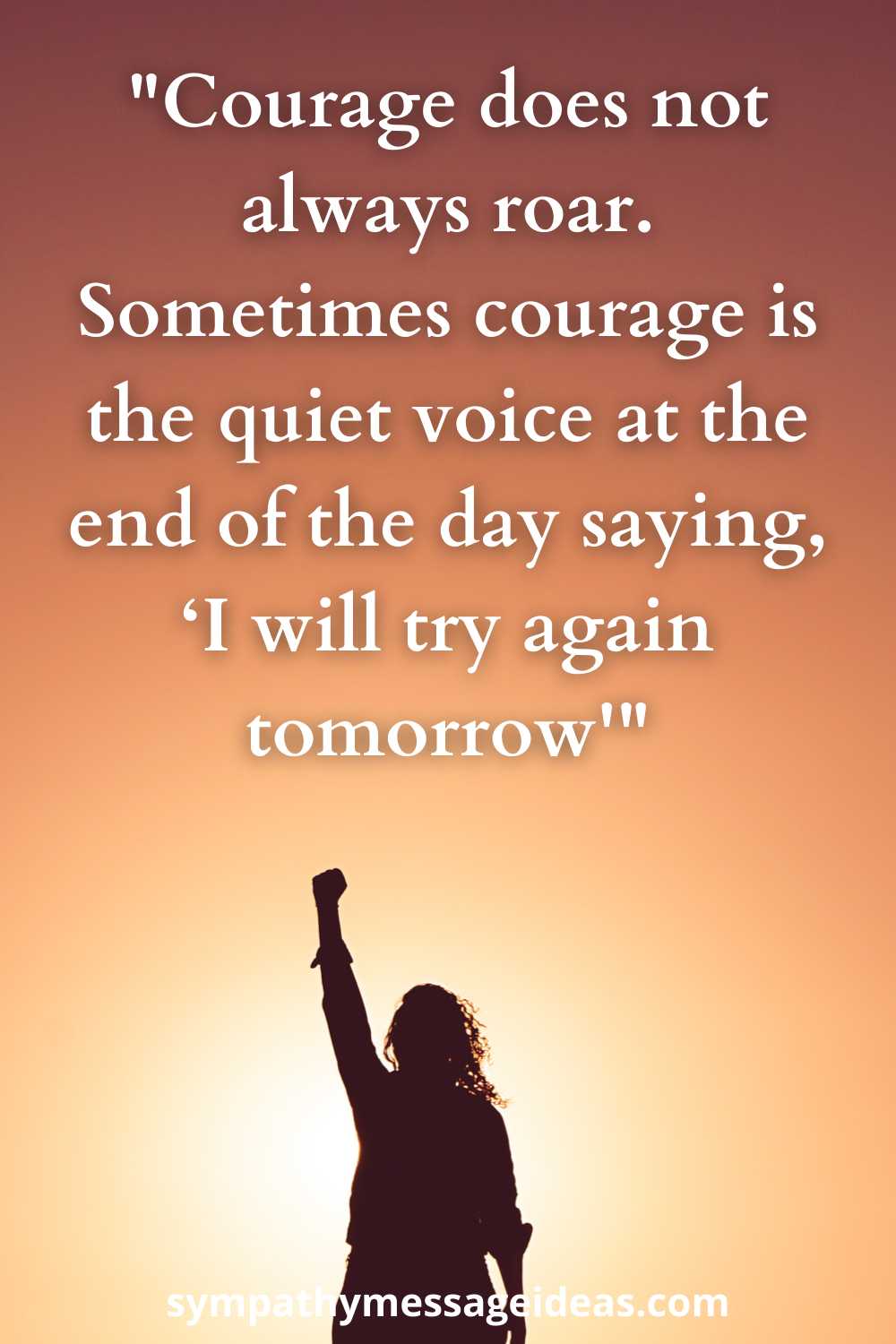 For those with suicidal thoughts or struggling with their mental health knowing others have suffered in the same way and overcome their problems can be inspiring. These quotes focus on coming back from the edge and living fully again.

“If your heart is still beating, God Is not done with you yet” – Dillon Burroughs


“Continue to live your life, know that it’s OK to smile again. Don’t ever be ashamed or let anyone make you feel ashamed” – Jackie Burson


“Time is continuous and whatever is happening right now will soon become the past. You have been through trying times before and not only survived them but thrived because of them, and you will again. Right now, there is a world of possibilities which can be harnessed to help you thrive again” – Michael Nulty


“There is a hero inside of you. You are the main character in an epic struggle between good and evil. Let’s travel to the dark places of grief together and climb out, where we can see the bigger picture” – Marie White


“Courage does not always roar. Sometimes courage is the quiet voice at the end of the day saying, ‘I will try again tomorrow'” – Maru Anne Radmacher


“Please reach out. Speak up. The worst thing you could do is to stay silent, like I did for so many years” – Kelsey Elizabeth Oney

These quotes about suicide come from those who have experienced thoughts of it, who know the dark places you go before considering such a terrible fate. They are hard to read and not in any way positive but they are important in understanding how suicidal thoughts affect people and why they resort to such measures.

“The whole notion of pain, and how every individual experiences pain, is up for debate. We don’t know how another person experiences pain—physical pain or psychic pain. Some of these clinics where assisted suicide or euthanasia is practiced, they call it ‘weariness of life.’” – Miriam Toews


“I didn’t want to wake up. I was having a much better time asleep. And that’s really sad. It was almost like a reverse nightmare, like when you wake up from a nightmare you’re so relieved. I woke up into a nightmare” – Ned Vizzini


“Killing oneself is, anyway, a misnomer. We don’t kill ourselves. We are simply defeated by the long, hard struggle to stay alive. When somebody dies after a long illness, people are apt to say, with a note of approval, “He fought so hard.” And they are inclined to think, about a suicide, that no fight was involved, that somebody simply gave up. This is quite wrong” – Sally Brampton


“It is not seen as insane when a fighter, under an attack that will inevitable lead to his death, chooses to take his own life first. In fact, this act has been encouraged for centuries, and is accepted even now as an honorable reason to do the deed. How is it any different when you are under attack by your own mind?” – Emilie Autumn


Quotes for Comfort after a Suicide

The grief after losing someone to suicide will be devastating. Very little can help after such a tragic event but these quotes may offer some comfort and let those grieving know they’re not alone.

“The pain you hid overtook you like the darkness overtakes the sun. But I comfort myself in knowing that even on the darkest night, stars still shine” – Jennifer Betts


“The ‘ton of bricks’ that are thrust upon your shoulders by a loved one’s suicide never goes away. But you do get stronger shoulders” – Frank Kaufman


“A person never truly gets over a suicide loss. You get through it. Day by day. Sometimes it’s moment by moment” – Holly Kohler


“Though you had to let go of this world to find peace, we hold on to your memory in our hearts, so you live forever” – Jennifer Betts


“Loss from suicide is like no other loss, and there’s no time limit for grieving. Allow yourself that time to process. And then talk to someone, anyone” – Deenie Bagley


“Know it wasn’t your fault. Know someday you may take comfort in educating people about suicide” – Sue Mahlburg


“Grief is like a long valley, a winding valley where any bend may reveal a totally new landscape” – C. S. Lewis


“One day, you’ll wake up and things won’t hurt as bad. You’ll be able to remember the good things about your friend and not just the end. For me, that’s when I knew I was finally able to move on” – Kristin Svinth


“Talk about them. Be proud of them. Losing a courageous battle doesn’t make you weak” – Jennifer Betts


The best piece of advice I got was, ‘Once you accept that many, if not most, of your questions will never be answered, you can start to move forward'” – Michele Starbeck


“If you’ve lost a loved one to suicide—even if you, yourself, have dealt with depression and suicidal ideation—you may often wonder why. And that’s okay. Allow yourself that space” – Karen Espenshade


Suicide is a tough topic to talk about. But because it’s difficult doesn’t mean we should ignore it. So spreading understanding and awareness is essential to tackling the stigma and discomfort people have with suicide.

Hopefully these quotes will do that and you have found the perfect one to prove inspiration, compassion or comfort. 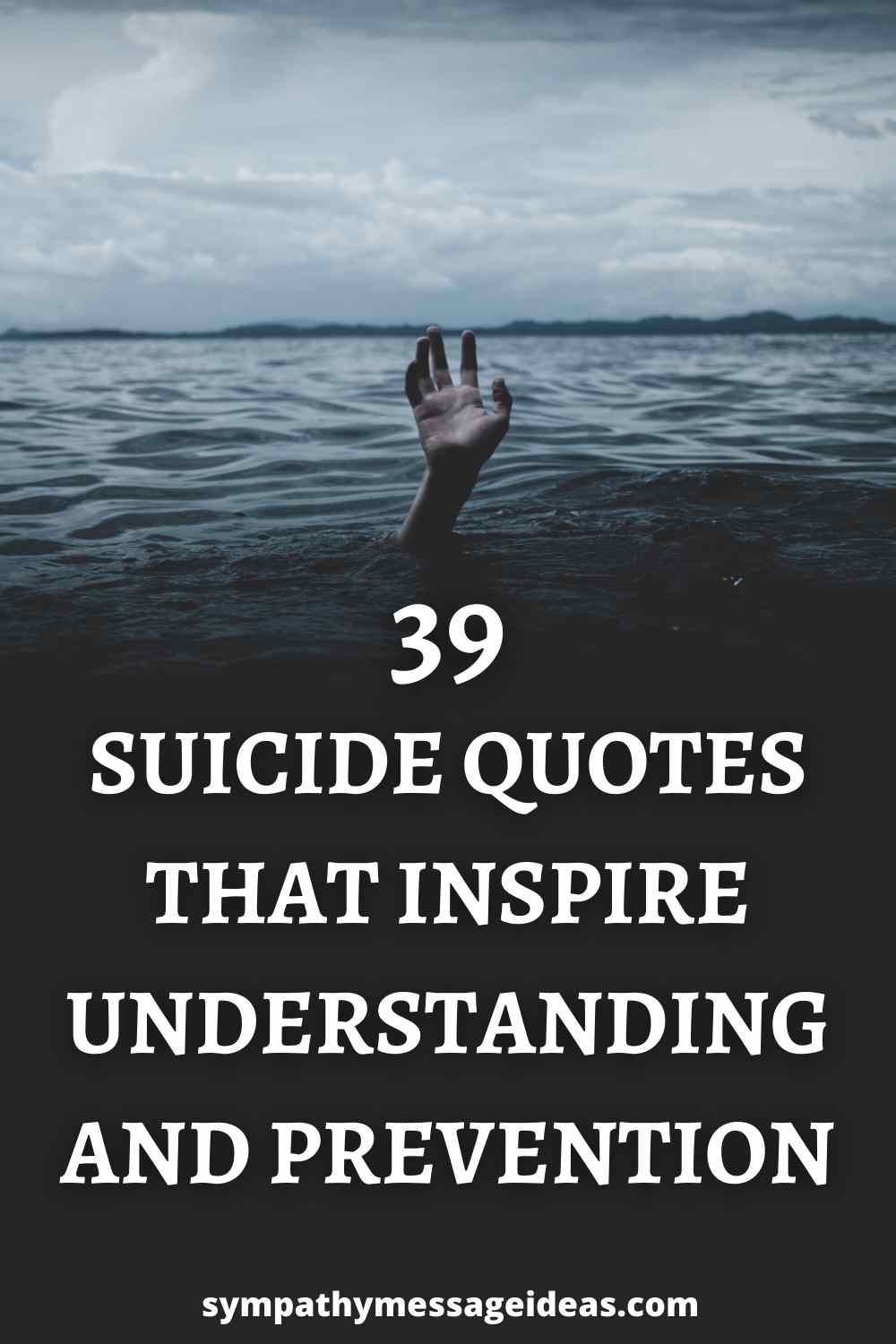 35 Quotes for Remembering Loved Ones at Christmas

Sympathy Messages for Someone Going Through a Breakup